When I first told friends I was moving to Oaxaca for the winter, they waxed poetic about mole sauce. Nicknamed the “the land of seven moles,” Oaxaca’s mole sauces underpin a significant portion of Oaxacan cuisine. Derived from the Nahuatl word molli, for “concoction” or “potage,” moles are a defining component of Mexican food here, and elsewhere.

There is some confusion, since “mole” is one of those general terms that refers to a large variety of options. In Oaxaca, there are seven main moles. But outside this region, mole sauces of different ingredients and flavors flourish. It’s as general as saying that all Vietnamese pho tastes the same — it doesn’t, it varies by region, tradition, and people.

The MexConnect site laments that “one popular (non-Mexican) food writer defines mole as a “thick, dark sauce” when, in fact, it is often neither dark nor particularly thick.” Mole sauces are dark and light, soupy and thick, and all sorts of colors — red, green, black, yellow.

There is one important consistency: these delicious sauces are not necessarily gluten-free.

Celiacs often have a really hard time with snacks as they travel, even in countries with knowledge of the disease. For most people, a to-go meal involves a sandwich or pastry, or a wheat empanada, or a gyro, or dumplings, a fun history in and of itself. Many of the ways that we stretch protein out and make it easy to carry is done with wheat. Not so here in Oaxaca, where corn is the base for almost all antojitos (snacks). Quesadillas and empanadas are made with freshly moistened masa, pressed quickly and then thrown on the comal griddle to cook before eating.

Moles are more complicated, and take longer to cook. Some are braised for hours, blending together a dizzying number of ingredients and chilies. The layer of tastes are unlike almost anything else I’ve tried. In my experiences outside Mexico, references to mole often refer to mole poblano, a combination of close to two-dozen ingredients that include chilli and chocolate, spices, raisins, nuts and more. In Oaxaca, there are 7 main moles and quite a few of them include bread.

As a Spanish speaker, living in Oaxaca brings the relief of satisfied curiosity. As a celiac, it brings the relief of communication for my disease. At the beginning of my time here, I asked every street stall or restaurant about their mole and whether it had wheat in it. The answer was always no, and an appalled no at that. How could you insinuate that my mole has wheat flour?!

Mole in Oaxaca is Not So Gluten Free

For the first few weeks I was enamored with my antojitos, and did not venture into the moles. And then I went to the local grinding shop only to watch horrified as people lugged in giant vats filled with chilies and sesame and bread, ready to be ground for mole negro.

It was then that I started asking way more specific questions. Does your mole sauce have wheat or bread in it? Suddenly the answers were very different. As with my experience in Greece (“wait, pastry dough has WHEAT in it?“), it took asking a very precise question to find out how damaging the food could be for me. This is also why I’m working on those gluten-free translation cards with food names on them — generalities just aren’t enough.

So, what do celiacs need to know about Oaxacan moles?

A note for the vegetarians out there: I have yet to encounter a mole here that is generally prepared friendly to your needs. While some spots serve vegetarian mole, the traditional recipes call for pork lard, chicken stock, or both.

Last Friday, I was on a conference call when a tickle started in the back of my through. my eyes started to water.

File this under ‘Oaxaca problems’: my landlady was smoking chilies in the kitchen, and the smoke wafted up to my apartment. It was a business call, and as the prickling heat increased in the air, I was unable to hold back the tears. I had to explain that no, our discussion wasn’t making me cry. It was the chilies downstairs.

After the call ended, I sat down on the couch with tears pouring out of my eyes, wondering what my landlady was cooking.

Not long after, she came knocking at the door with home cooked chicken mole rojo, made without bread. She knows about my disease, and was proud to note that she never used bread in her mole sauces. Given that I can’t eat this type of mole at restaurants, she wanted to give me a taste.

And what a beautiful plate it was! 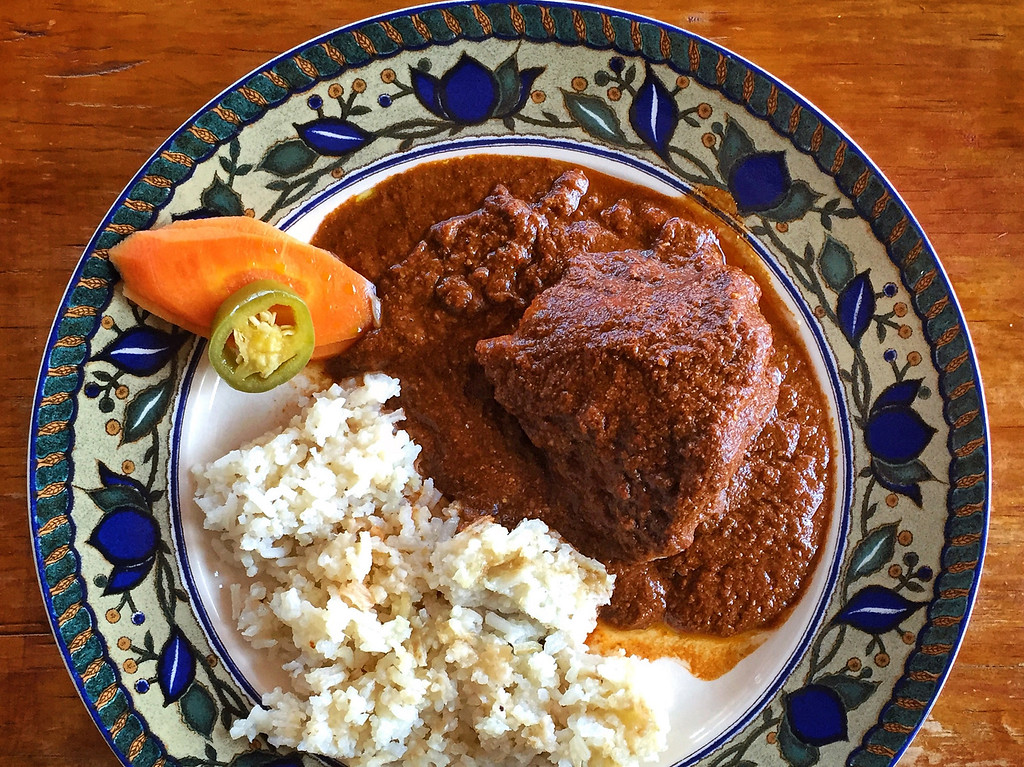 I’m off to Belize and Guatemala tomorrow! I’m excited to report that I am not bringing my laptop. I will, however, be on Instagram, with the occasional Snapchat. (Snapchat is legalnomads just like everything else).

For those who missed it, my gluten free guide to Italy is now up also.

Have a great weekend!