One Week on the Gili Islands, Indonesia

Practical Info about The Gili Islands

Before I get into my thoughts about this week of blue and beaches, I wanted to kick of the post with some practical information about the Gili Islands, since it was an easy summary of my time in the region.

Pondok Sederhana, Rumah Guest House or Lisa’s Homestay. While the beachside places are beautiful, you get no authentically local experience in staying there. Prices tend to vary throughout the day, with highest prices at night when the owners know that most of the island’s hotels are full. If you get there in the morning, expect to pay 150,000-200,000 Rp ($15-$20) for a double room, including banana pancakes for breakfast. Sleeping in the village proper, with all its animals, friendly locals and charm, was well worth it. Just don’t forget to bring your sarong! Bring your moisturiser too: none of the cheaper acccomodation has freshwater showers, and the constant salt water will dry up your skin in no time.

Borobadur 2, Ru’ude Maken and Kiki’s Warung all have great 10,000 Rp – 15,000 Rp ($1 – $1.5) heaping plates of nasi campur. Tir Na Nog’s pizza was also thin-crusted, crunchy and delicious. The Soup Lady in the Public Harbour makes a great soto ayam (chicken soup with noodles and meatballs) for 6,000 Rp (60 cents) and across the street from her is another lady selling nasi campur for the same price.

Tir Na Nog for happy hour, Coco’s Cafe for freshly brewed Illy coffee and a great view of the public harbour, or on the porch of your bungalow, watching the world go by.

Rent a bike and cycle the perimeter of Gili Trawangan, take a public boat (20,000 Rp ($2) each way) to Gili Meno for the day and visit the turtle sanctuary and quiet beaches, do a diving course with Manta Dive or Blue Marlin Dive, take a glass-bottom boat and snorkle to your heart’s content, watch the stunning sunset from the northernmost tip of Gili T or the lookout point in the centre of the island.

My thoughts about The Gili Islands

As a long-term traveller, island life is imbued with a deeply decadent routine that you could never justifiably adopt on a two-week holiday. The guilt associated with spending a full day reading on a soft ribbon of white sand, or sitting and hearing stories about the island from its inhabitants for an entire afternoon all but disappears. The pressure slips away, and you succumb to an almost bovine placidity. You spend your hours as you feel like spending them, without the looming thundercloud of your time in paradise coming to a close.

Joanna only had two weeks off of work, and was thus burdened with the guilt of wanting to do everything whilst wanting equally to return home feeling relaxed and vacationed. After a informative and lively week in Bali (the “do everything” part) we moved to the Gili Islands to soak in the sun (the “relaxing” part).

For me, the Gilis held a semi-mystical position in my mind; I had heard about them way back in fourth grade, from a classmate who stated with the solemn confidence of a ten-year-old that they were “for grown ups only.” I didn’t know then that her cousins had visited Indonesia and proclaimed the Gilis to be the nicest place on earth; my friend’s mother dashed any aspirations of going there by saying my friend was too young to go. In the years that followed, articles about the Gilis stood out, bolstered by the stubborn attachment of my childhood memory. Now a “grown up”, I was excited to see the islands that had occupied a small storage space in my mind.

About the Gili Islands

The Gilis are actually made up of three separate islands of descending size. Bridging the waters between Bali and the massive island of Lombok, Gili Trawangan, the biggest at 3 km long and 2km wide, is the most popular and has a reputation for excellent diving, long stretches of white sand and magic mushrooms. Gili Meno is a couples’ paradise, with thoughtful, airy bungalows and quiet sandy paths, as well as a small turtle sanctuary and a bird park. Gili Air lies in between, both in attitude and geography: it has several bars and dive shops to choose from, but is far more secluded and less trafficked than Gili T. All three islands share the same animal-transportation rule: no dogs, no cars and no motorcycles. This rule means that the Gilis are populated by a disturbing amount of cats, goats, cows and chickens, and transportation is limited to bicycles and horse-driven carriages called cidomo.

With no dogs to chase them away (and no cars to scare them into submission) most of the Gili animals were brazenly unafraid of tourists, locals or horses, darting out of the way at the last second when an approaching carriage galloped by and populating every alleyway and path. There were strange mini-chickens, squat and almost legless, clucking around the warung across from our hotel, and goats roaming up and down the streets, chewing everything they could. Cats followed you from the beach and back, weaving their way into and out of the restaurants and shops along the way. It made for a very entertaining week.

Also entertaining? The nightlife on Gili T. The island has a reputation for being a haven for those wishing to indulge in magic mushrooms and party all night. The islands have no official police force and complaints must be formally lodged with the local council for the appropriate island – or you can head over to Lombok and bus it to Mataram to make a proper police report. As a result, streams of tourists made their way to the Gilis on the hunt for substances that are customarily dangerous to possess on mainland Indonesia without risking a 20 year prison sentence.

Notwithstanding a few bars with signs that read “We will make your evening magic!” or the less subtle “Ask for magic mushrooms inside!”, I didn’t find Gili T deserving of its salacious reputation. The most dangerous thing there to me were the spiders; Wikitravel notes that “There are massive spiders roughly the size of a grown man’s hand scattered about the islands; while not poisonous, their bites can result in a painful wound.” I came face-to-face with one of these beasts after Joanna left, and it was not pretty.

That said, there were parties on the island, of course – 3 times a week, different bars play host to tourists and locals alike, with happy hour starting at 7pm and drinks flowing throughout the night. Mondays: festivities at Blue Marlin Bar, where we found the drinks to be weak and the staff unfriendly. Wednesday: party at Tir Na Nog, the local Irish pub, where we found the drinks to be strong and the party everlasting. Fridays: party at Rudy’s bar, where the venue was packed and I got a drink spilled on me 3 times in one night. My vote goes to Tir Na Nog.

Our days were spent on the beautiful beaches on Gili T and Gili Meno, and getting lost in the inner patches of forest at the heart of Gili T. As time ambled by and we settled into our beach-warung-bar routine, we managed to end Joanna’s vacation with the relaxation she deserved.

After the Gilis, I decided to take a slow-boat to Flores via Komodo and Rinca to see the Komodo dragons and the smaller islands in the Sape Sea. It ended up being quite the adventure, with details coming in my next post.

ps. here is one of the 2 pregnant goats that chased me up the street: 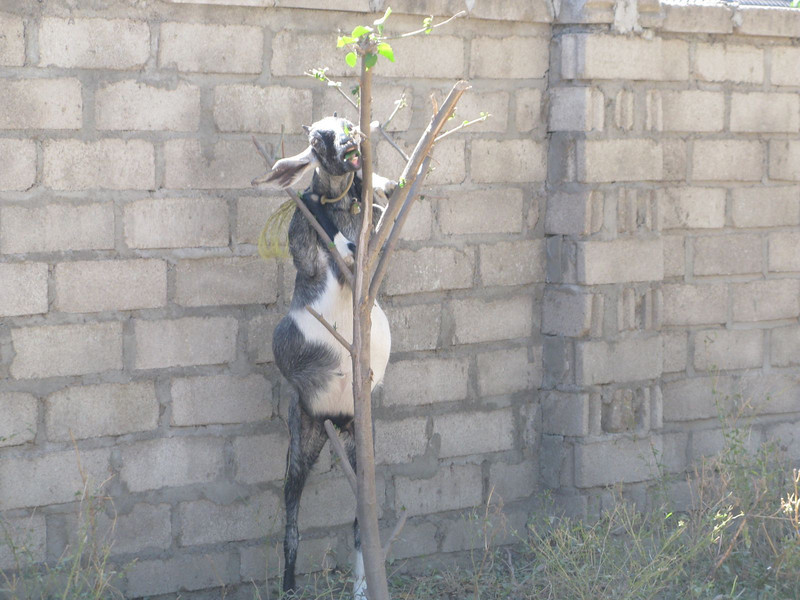