We are currently in La Paz, Bolivia. Here is the first part of how we got here — via the stunning salt flats of Bolivia in Salar de Uyuni, and in my case, with an incredibly bad case of food poisoning.

We last left you in the Colourful Chaos of Valparaíso, Chile. From there, we went to Santiago and flew to Calama, Chile, in the middle of the desert. The runway was a dirt path etched into the earth, and the airport was a squat building with one way in and out, and no separation between arriving and departing passengers. From there we took a minibus to San Pedro de Atacama, at an altitude of 2,400m (that´s 7,900 feet for you non-metric people), smack in the middle of the Atacama desert and dubbed the most arid place on earth. San Pedro de Atacama (hereinafter “San Pedro”) hadn´t seen rain for 52 years until January 2008, when it rained for an astounding 20 minutes.

The town does, in fact, look very very dry, with squat dirt buildings and dusty roads – very Tatooine, as Jess would say. Dusty enough that, upon our arrival in La Paz, the hotel took one look at our dirt covered bags, bodies and faces and asked where in the desert we came from. Being as high as it was, we were all quite winded and dizzy until we adjusted a bit to the altitude.

We spent two days San Pedro, one of which included a great bus trip out to the Valle de la Muerte (death valley) and Valle de la Luna (Valley of the Moon), where we got to watch the sun sink down into the desert and carpet the desert dunes in blues, pinks and reds. I jumped on a last-minute trip out into the desert after sundown (and by last-minute I mean telling the bus driver I hadn’t paid but was small enough that I would just squeeze into the back seat of the bus and he´d forget I was there) to San Pedro de Atacama Celestial Explorations, aka the home of Alain Maury, a French astronomer, and his wife. Alain´s garden is scattered with a plethora of huge telescopes and as the moon rose and moved across the sky, we were able to discover the many southern hemisphere constellations that I have never been able to see before. Because of San Pedro´s location and the total lack of light in the desert, we were even able to see the milky way with our naked eyes. The highlight was when he took my camera and took a picture of the moon from the eye of the telescope. Picture is below, and Alain´s website is here.

Moon picture, as taken with my yummy Canon G9: 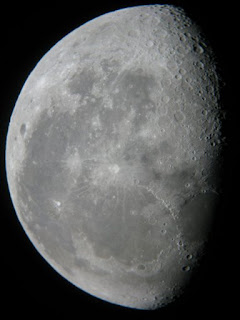 Our aim in hitting San Pedro was to take a tour of Salar de Uyuni on a 4×4, the world´s biggest and highest salt flats. We – and at this point “we” was Jessica, me, Neda (our resident medical resident) and Daniel, a Swiss/Swedish/Iranian/Brit who is moving to Dubai and who we co-opted on the bus from Calama to San Pedro (hereinafter “the international foursome”) – booked a 3 day tour to Uyuni with Estrellas del Sur, a company we had heard good things about on the interwebs, and were excited that the driver that several blogs recommended was the one assigned to us. We ended up being 2 jeeps in total – ours with the 4 of us and a pair of Belgian ladies and the other jeep consisting of 3 Brits, a Spaniard, a Scot and a Dutchman (insert your jokes here, people). The night before we left, we went out for empanadas at what every other person we met said was an amazing empanada place. I had a llama, quinoa and cheese empanada. This was a mistake. Jess and Neda, being the intelligent creatures that they are, had cheese and tomato empanadas instead.

We started out at 8am the next day in San Pedro with me sick as a dog and it got worse from there. I spent the prior night thrashing around in my sleep and started the morning sick at the hostel. Phil, also at our hostel and with whom we will reunite in Cusco in a few days, was nice enough to help me bring my bags to the tour company (Jess and Neda had theirs to drag with) and I braced myself for a full day of bumpy roads and dust. It wasn´t pretty. While the rest of our group got out to see the myriad of colourful lagoons, salt lakes, flamingos and llamas, I sat slumped in the front seat of our Toyota Highlander. Jess and Neda´s pictures will paint a picture of our first day; I didn´t take out my camera once. I think the low light was my running to throw up TWICE behind a burnt out, abandoned bus at the Bolivian border. As in, at the border itself (a dirt hut in the middle of nowhere) there was an old bus that someone had set on fire, and now it has a llama empanada left behind. Twice.

Perhaps this really IS a lesson in karma: don’t eat your favorite animal, or bad things will happen to you.

At this point, we had ascended close to 5000m (16,400 ft) and, while I remained delirious in bed (still unable to keep water or food down), Jess started to feel some serious effects of the altitude. Our first night was at a Refugio with no hot water or heat, and I dimly recall Jess telling Neda she thought she might die. Having dealt with a bad bout of altitude sickness in Ecuador, I can relate to how awful it feels. As she put it in her email home, “basically just imagine those nights where you are hugging the porcelain god and swearing off alcohol forever… and multiply that by 100”.

Our resident medial resident convinced Jess to take a Diamox pill for the altitude and her symptoms abated by morning, but the nausea and dizziness lingered. Thank god for the kindness of semi-strangers – Daniel was the one to tuck Jess in, get her extra blankets and promise her she would still be alive come morning.

On our second day, we both felt a bit better and ended up having a lot of fun. We saw tree rock formations, mountains that looked as though they had been painted in stripes of earth tones from top to bottom, and another lagoon with flamingoes (since the other 3 were flamingoed out from the day before, I sat by the lagoon´s edge snapping pictures of them).

That night, we stayed overnight at the salt hotel where everything – floor, walls, tables, chairs (by “chairs” we mean “big pile of salt to sit on”) were made of salt. Lights went out at 9pm (and only went on at 7) so we sat drinking wine by candlelight and chatting.

Lobby of the Salt Hotel. Mmm…salty: 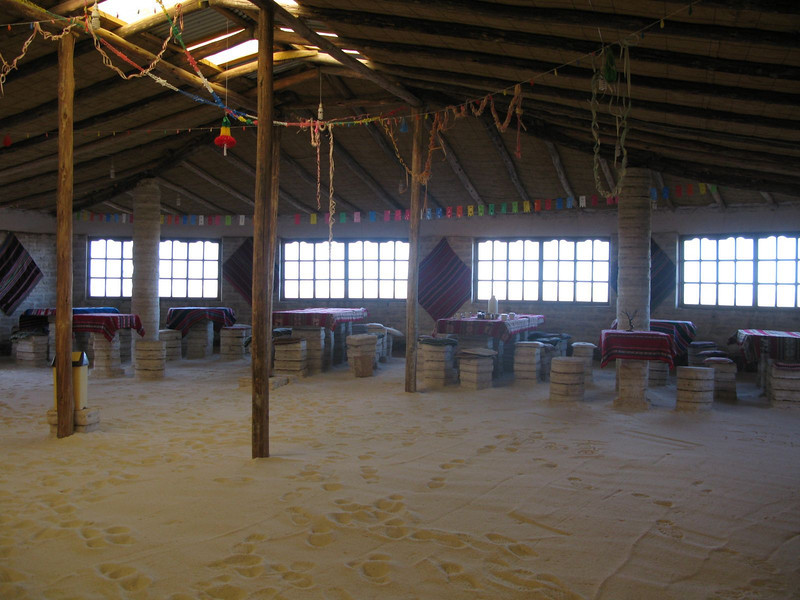 Our last day, we got up at 5am to watch dawn break across the Salar de Uyuni. Except – we didn´t leave on time. The salt hotel people told us, evasively, that our driver was sick, but Daniel and I went into the kitchen and found our driver – at 5am – STILL drinking beer. He had stayed up the whole night drinking and was completely, blindly drunk. Since we had no where else to stay or go, and it was a straight line to the salt flats, the 6 of us got in the car (stinking of alcohol, no less) and made our way there.

As Jess said, if we are going to get in the car with a drunk driver, at least it is on a flat road to more flatness.

Our driver did drive a bit too far (as in, kilometres past the other cars), and we did miss the sunrise in most part, but we all took turns asking him questions to keep him awake and focused, and after throwing up a few times along the way, our driver managed to carry on a proper conversation and we all breathed a little easier. Ironically, we had read horror stories about the drivers being drunk on the 2nd night but chose our tour company because reviews said the OPPOSITE – and our driver seemed so great the first day, and knew so much about the area and Bolivia. It was such a disappointment.

When we tipped him (yes, we still tipped him – Bolivia is so desperately poor and while completely unacceptable, we couldn’t leave him empty-handed, especially when paying $90 for 3 days of food and lodging and gas, etc), we made sure to tell him he would have gotten more had he not been, you know, DRUNK OFF HIS ASS.

We spent the better part of our last day taking ridiculous pictures on the salt flats with our props (spoons, chopsticks, Pringles, each other, etc). 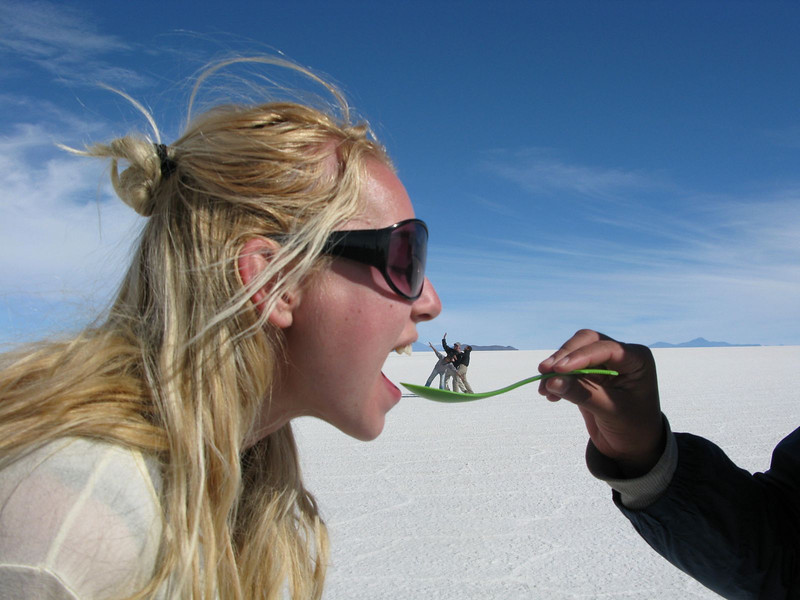 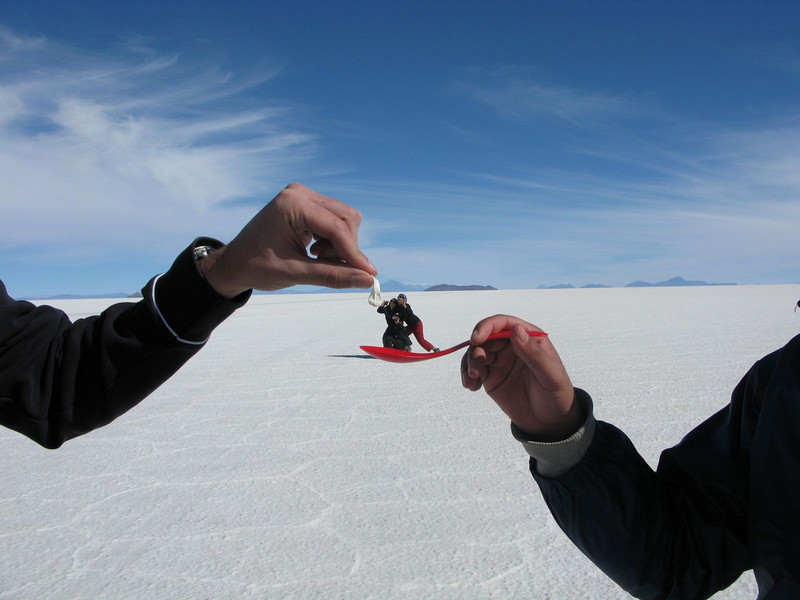 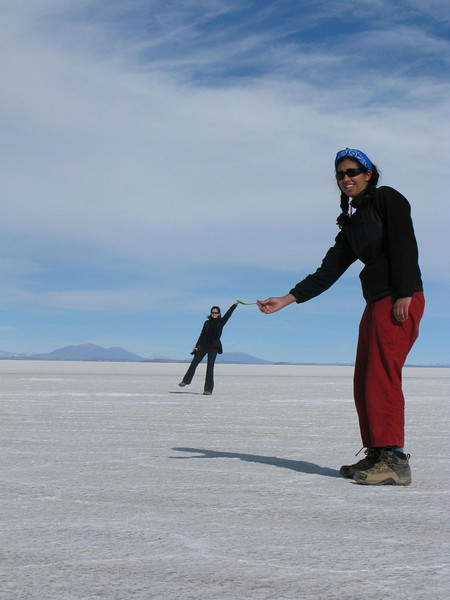 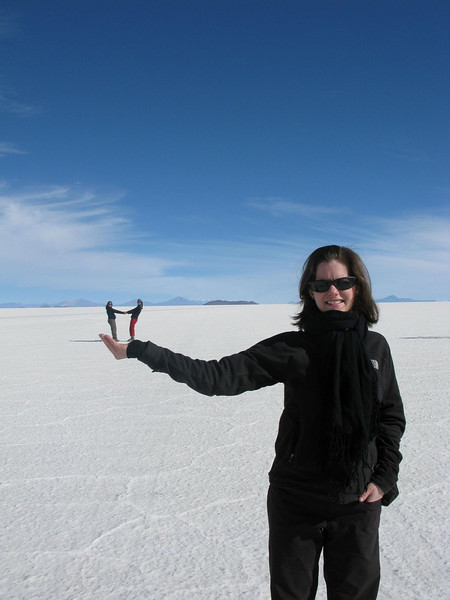 3 thoughts on “San Pedro and The Salar de Uyuni”