The Colourful Chaos of Valparaíso, Chile

My friend Tania, who hails from Punta Arenas (and I mean hails from Punta Arenas – i.e. her grandfather´s warship, the Lord Londsdale, is proudly on display outside the city limits) knew I would be enchanted by Valparaíso (literally, “Paradise Valley”). Given that I thought ValPo deserved its own blog post, I´d say she was right. In retrospect, there isn’t one thing about the city that stands out. From the winding, tangled streets in the many cerros (hills) that peer down upon ValPo´s famous harbour to the happy surprise every time I turned a corner only to be captured by yet another cheerful mural or web of vines framing a bright corner building, all I can say is that I spent a giddy few days photographing everything in sight.

Only 70 km from Santiago, Valparaíso is off the usual backpacking “circuit”, as there is nothing famously notable to do in the city, save for wander the streets. Sure there is horsebackriding along the Pacific or visiting Pablo Neruda´s house – but the true draw is the historic district, named a UNESCO World Heritage Site in 2003. Chile also named the city its “Cultural Capital” around the same time.

The city is built around the Bay of Valparaíso in a yawning semi-circle, with the bustling maritime trading at the sea´s shore and the rest of the city jumbled and stacked behind it, rising up into the many cerros that overlook the bay. ValPo was the most important city in Chile for many years until the Panama Canal diverted traffic from the country´s coasts, and remains one of the largest port cities along the Pacific.

From the port, ValPo looks like a dizzying, legolike chaos of a city. Its colours reflective of Reykjavik, Iceland, looking down at the water from atop the cathedral there. In ValPo, favelas (shantytowns) sit at the top of the rolling hills, the UNESCO heritage site directly below then, and the flat port at the water´s edge (called El Plan), with over a dozen funiculares to shuttle you between the hills and the sea.

We did not get to see ValPo’s famous sunny weather, and though I am sure it would have made for some lovely photos, our few misty days here made the haunting otherworldliness of the city that much more tangible for me. We stayed at one of the nicest hostels any of us had seen called La Luna Sonrisa (Templeman 833, in Cerro Alegre – for anyone who is thinking of going) and the warmth with which we were welcomed certainly made our time in ValPo even more delightful. We were also able to meet up with Chett, an American studying on exchange in ValPo, who we initially met in our hostel in Punta Arenas our first few days there (of note: Chett took us to a cafe with incredibly decadent deserts, among them the meringue-iest lemon meringue pie known to man – yum).

Some photos of Valparaiso

View from the hostel, looking down: 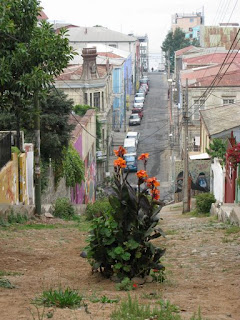 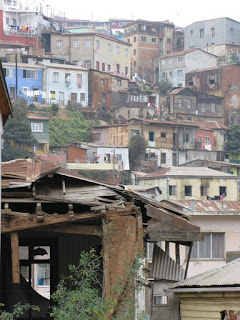 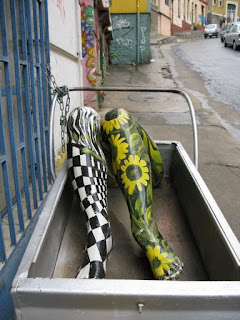 Murals (and the cactus with the most personality, ever): 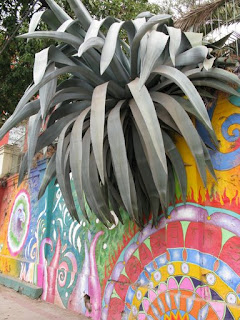 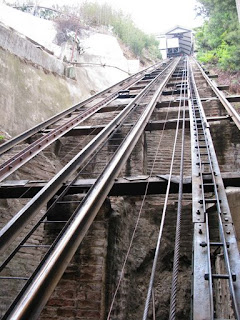 Jess, Neda (our adopted medical resident from San Francisco) and me walking down to the port: 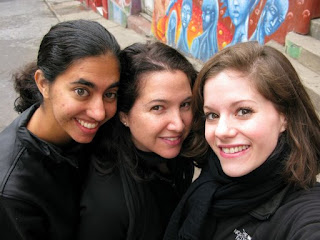 2 thoughts on “The Colourful Chaos of Valparaíso, Chile”