The Limits of Long-Term Travel: It Doesn’t Fix Everything

“Took a deep breath and made my way to the train station at dawn. Though the ticket-lady immediately looked at me like I had just grown a 2nd head, I stood my ground for the next available train “somewhere far”. Looks like my first solo experience will be to Annecy; I hope it goes well.”

On my to-do list after returning from Asia: going through my belongings in North America and starting to purge. The boxes of suits and jackets, the briefcases, the remnants of a lawyerly existence that I no longer live.

In doing so, I stumbled upon the journals, photos and memories of all sorts of prior adventures. My year working in South America (in 2002), and my time studying in France (in 2001), the quote above being part of the latter.

Spoiler alert: I ended up having a lovely time in Annecy, and the wondrous experience of traveling so freely catapulted me into a new state of being. I could go where I wanted, when I wanted.

People often ask me what compels me to continue traveling. It took me two full years to write a post about why I quit my job to travel around the world and on the cusp of yet another big move, this time back to Asia, there’s another important topic that merits discussion: the things that travel won’t fix.

Inherent in any conversation about quitting work to explore the world is a vague accusation that one is running away from something by doing so. I think my ‘why I quit’ post dispels a good amount of any such finger pointing; working long hours for 6 years to save for travel is a pretty resolute way to refute running. Unless I’m just a really slow runner?  That said, I would be lying if I claimed that I had no hopes of being fixed by my adventures. I dreamed of being completely fearless, of never worrying about anything again. I longed for a calmer brain.

But some things are hard-wired in you.

Some qualities, no matter how much you work at changing them, will lessen but they won’t go away.

And in the spirit of disclosure and admission, here are the limitations of long-term travel, the things that many months of wandering didn’t fix.

The Problems My Travels Have not Fixed

I am, and will remain, an arachnophobe. When I was 2, my father took me to see Raiders of the Lost Ark, despite my mother’s concerns that I would be scarred for life. “She won’t remember – she’s 2!” was the gist of his response.

Unfortunately she was right: I woke up screaming about spiders for 2 years running; I became irrationally afraid of arachnids.

In 2003, when I lived in a tiny town called La Barra de Maldonado in Uruguay, my house was carpeted in a terrifying tapestry of wasps and poisonous spiders. After a week of insomnia, I finally came to grips with my predicament. Stubborn to a fault, I decided that going home wasn’t an option. But making a deal with the spiders was, and I lulled myself into a jagged, superficial sleep at night by pinpointing where the spiders were in the room and telling them to stay there. Whatever works, right?

When I returned from South America, I thought my arachnophobia was gone. I was wrong. Cue trying to kill poisonous spiders on the Perhentian Islands, all the while trying not to throw up in my own mouth. (2022 edit: despite a Vipassana meditation course replete with spiders, even ones that fell down from the ceiling while I was trying to meditate, I am still an arachnophobe).

After 6 years of learning to fight about small lines in a big purchase agreement or contract, it is hard to unlearn. I was basically paid to sweat the small stuff as a lawyer.

In balancing one’s fears and dreams, it helps to remember that the small things in life are not necessarily those worth throwing a temper tantrum about. After several years on the road, I’ve learned to prioritize what really does matter in life, but sometimes I slip back into lawyer-mode and lose perspective.

I hate packing  just as much as I did when I started my travels. I agonize over packing. I worry that I will bring the wrong things, that immediately upon setting foot in a new place I will be bowled over by a long list of absolutely necessary items that I just cannot live without.

This is both untrue and relatively stupid, but knowing as much on an intellectual level does not stem the tide of worry. I am unclear as to why packing remains so cumbersome to me, but after so many months of travel, I think it’s high time I accept the dread and move on.

4. I remain terrible at compartmentalizing

I can maintain a veil of placidity and reassurance in an online setting (as in, I don’t tweet about it), but those who’ve met up with me know that if there’s a family issue at home or a cause I feel passionate about? I’m going to be distracted by it.

The upside to this realization is the fact that it has made me less of a procrastinator; I’ve learned that addressing my worries head-on is the best and most effective way to get past them.

5. The stress of pressing publish

I still agonize about every blog post. One would think, after writing for so many months, that writing would get easier. While I now tend to handwrite notes in buses or planes, I still spend far too much time hemming and hawing over how a post will be received or what I ought to say.

While this means that I don’t regret anything I’ve posted on Legal Nomads, it also means that I could be writing more (and more impulsively) if I just relaxed and posted as my ideas came to me.

Perhaps this is still something I can work on in 2011? Only time will tell.

Editor’s note: It’s 2022 and I can confirm that this is not, in fact, something I can work on and still proves to be true today.

6. Knowing what my future holds

I still don’t have a clear path for the coming years.

Daniel Baylis, about to head out on his own round-the-world trip in just a few days, posted a great photo on his Facebook page (below) and I wholeheartedly agree with its sentiment. I am fortunate to have met an incredible cross-section of people and experienced a wide variety of adventures. Do I have a plan? (This is everyone’s favourite question “Jodi, do you have a plan?” or “Ok, so you’re going to continue traveling. But what is your plan?” or, from my family “But don’t you want to stay and play in the snow? THAT’s a good plan!”)

No, I do not have a plan. I thought I would upon temporarily returning from my travels, but it’s just not the case. 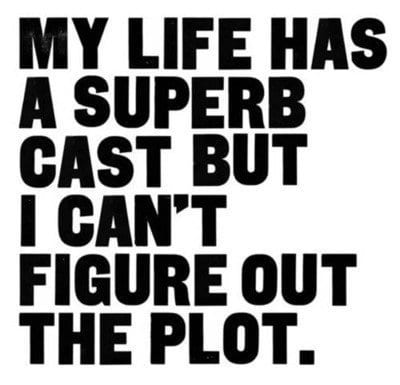 In the end, I remind myself that these years of travel are quite a decadent thing. To be able to continue my wandering, my learning, my sharing is something I never expected and something that I am grateful for each day.

It is important to note that I don’t beat myself up for this list of things.

Echoing back from each of them is a list of counterpoints, of strengths I never knew I had and things I never thought I could do.

I am a lot braver than I knew; I stay put even when things have gone awry.

I am no longer the girl who won ‘most easily embarrassed’ in high school. Instead of painful, I find it easy to talk to people I don’t know.

I enjoy sitting on top of buses more than inside of them.

I’ve learned (and I truly believe) that everyone has a story to tell, and if you listen properly it will help you with your own trajectory too.

I learned how to listen, to really listen.

I realized that you really can do what you set your mind to, if only you are courageous enough to try.

I accept that I need to know and want to share as much as possible about the history of a new place, or else I feel that I did not do it justice.

Crazy things happen to me on planes.

Birds love the top of my head (but might actually have a vendetta against me).

I will climb mountains even though I’ve got a bruised rib and bronchitis or have lost several of my toenails.

I crave the sensory overload of a bustling food market in a new country.

So many stories, so much travel and yet still so much to look forward to. I’m heading back to Asia in January to eat more of the food I love, to reunite with friends in Thailand and to keep exploring and learning as much as possible.

That travel is itself an instruction is undeniable, but the depth of learning is contingent upon how much a traveler wants to soak in. I still see travel as one of the most intense, effective ways to educate myself; I accentuate this by reading up on the history of a place before I hit its shores and by doing my utmost to understand the culture, people and food when I arrive.

And, while we don’t “fix” ourselves by traveling the world, we sure learn a lot about who we are in the process. Will I ever go back to being a lawyer again? I don’t know. I don’t know, but I’ve tried to make decisions that help support me if I decide to build an alternative career to my formerly legal one.

I feel very fortunate to have crafted a life where I can pursue the dreams that invigorate me, and part of what makes that pursuit so fulfilling is sharing the resulting stories, photos and thoughts with the readers on my blog.