Like many neighbouring countries in the Levant, Jordan is known for its dips and tiny, tasty dishes called mezze. Scattered on the table in bowls and mopped up with fresh pita or saj breads, meals begin with an overwhelming array of options. Mouttabal to tabouli, hummus, labne yoghurt, and a variety of other rich and creamy appetizers, each with its own distinct taste but fitting seamlessly, one after the other, into a crescendo of flavours.

To start each meal with such a wonderful swirl of tastes felt decadent at first. I am not used to the dance of flavours that mezze brings, and I loved every bite. And then, I got to main dishes like maklouba.

Maglouba can also be spelled magloubeh, maglouba, maqluba, makloubeh and sometimes ma’aloubeh, and has its origins in the Middle East generally, not only Jordan. I learned this recipe in Jordan, from a Jordanian chef – but there are versions from Syria, Lebanon, and beyond.

The origin of maklouba appears to be a medieval Arabic cookery book, but the dish is found throughout the Middle East today.

In Olives, Lemons & Za’atar: The Best Middle Eastern Home Cooking, chef and author Rawia Bishara refers to the dish – spelled makloobeh there – as “the impressive Palestinian lamb dish meant to serve a crowd.”

Guidebooks to Jordan, Syria, and the Levant all refer to makloubeh as common dishes in the region, with no treatise on origin.

In his May 2019 cookbook Saffron in the Souks: Vibrant recipes from the heart of Lebanon, John Gregory-Smith writes, “makloubeh is a delicious rice dish found throughout the Middle East.”

Even Wikipedia notes that the dish’s origin is simply, “Middle East,” adding that it dish goes back centuries and is found in the Kitab al-Tabikh, a collection of 13th century recipes.

One thing is certain: the dish – perhaps from Baghdad, perhaps not – is a popular feast in the Middle East today.

The name maklouba – meaning “upside down” in Arabic – speaks to the dish’s main features: with roasted vegetables, spiced rice, and a meat of choice, it is presented by carefully flipping the pot over and serving it upside down.

As per the recipe for Maklouba below, it is pre-cooked in segments. Vegetables first and rice second, folded with a mix of traditionally Middle Eastern flavours. Piled artfully into a pot and cooked over the stove, the whole lot of it is tipped upside down on the plate once complete, revealing the patterns of meat and vegetables below. The rice (used to getting its own plate) is relegated to second billing. Sorry, rice! The chicken-eggplant-cauliflower combo is just too good to ignore.

It’s not a difficult dish to make, though it does take a few hours. Presentation, however, is key: when you up-end the pot as you serve the dish, you want a neat pile of vegetables and meat to stare at.

Not spilling everything out as you flip over the pot is also key; let’s just say when I tried this at home, the first iteration ended up on the floor.

It’s been fun to experiment with different versions of maklouba, building a tapestry of colours and textures that is only visible when I flip over the dish. I’ve tried it frying up the onions with turmeric first, rendering them yellow, and leaving the rice white.

Another version included curls of eggplant skin to add some purple to the end result. Lots of room for creativity here!

(Adapted from Beit Sitti Cooking School, with some changes)

PART 2: Time to build your maklouba:

If you prefer a video recipe…

For those who prefer getting their recipes in video format, I’m sharing a video by The Cookbook on YouTube, who make their own version of maklouba / makloubeh on their channel. I am not affiliated with them, but over the years people have asked me to do videos for my recipes, and I am unfortunately too unwell to do so now. So I’m linking to someone else, who does it well.

I recommend these cookbooks:

If anyone tries this at home, please send me your photos to jodi-at-legalnomads.com – I’d love to see what fun upside-down deliciousness you come up with!
-Jodi 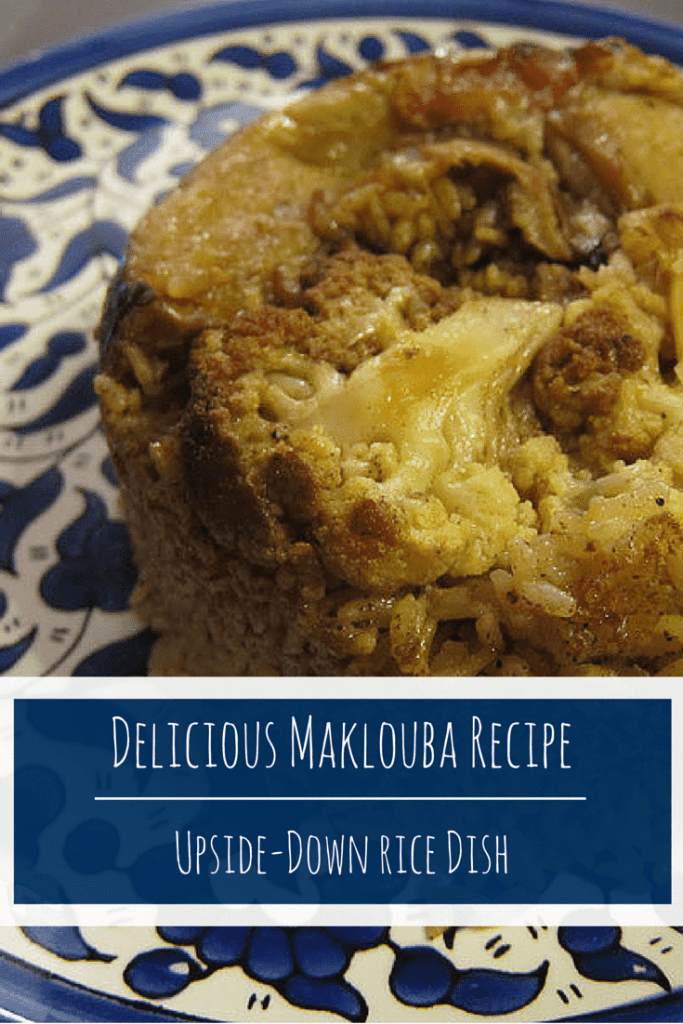