Where to Find the Best Vietnamese Food in Ottawa

When I return to North America in the summer months to visit friends and family, they ask me what foods I missed while I was away. “Did you want me to buy something particular?” my mum emails me before my arrival. “Was there anything you missed?” With the exception of cheese curds, sharp cheddar cheese, grapes, and cottage cheese — there really isn’t much. To the contrary, when I visit Canada I find myself wistful for my favourite soups of Saigon. So it was no surprise that during my recent visit to our nation’s capital, I spent most of my time trying to find the best Vietnamese food in Ottawa.

As with all my other “where Jodi Ate” roundups, this post has been added to my Gluten Free Guides page. For those who can eat wheat, there are plenty of options on the menu too.

History of Vietnamese People in Ottawa

In 1975, the Northern Vietnamese took over Saigon and the city fell, resulting in Communist rule over the entire country and the South’s renaming from the independent Republic of Vietnam to the current Socialist Republic of Vietnam. While much has been written about the Vietnam War (or, as it is known in Vietnam, the American War), I wanted to touch upon what happened to some of the South Vietnamese who fled following or during the fall of Saigon, many of whom made their way to my country of Canada by boat.

According to Radio Canada International,

By 1985, 110,000 Vietnamese refugees had settled in Canada. The “Boat People” were internally diverse: they included a variety of social classes and both urban and rural dwellers. The majority did not speak English or French and had no relatives in Canada. They also arrived during a period of economic downturn in Canada. These factors led to a struggle to integrate into Canadian society and to achieve economic independence.

Ottawa in particular opened its doors to the Vietnamese under former mayor Marion Dewar, who spearheaded what she called Project 4000. The project welcomed 4,000 “Boat People” to the capital through private sponsorship, not simply to fund their stay but also to be matched with people who could help them settle in and deal with the culture shock. Despite Ottawa only housing 800,000 people at the time, Dewar committed to the 4,000 incoming Vietnamese people, and raised quite a bit of awareness for the Vietnamese-Canadian community. When she passed away in 2008, she was honoured by the Vietnamese-Canadian Federation.

I delve into all this in order to give an overview about why there is such a large Vietnamese community in Ottawa. If you’re interested in the individual stories, Multicultural Canada has a database of stories from the people who came to Canada here. I will say that while New York is a thriving metropolis of delicious ethnic eats (I highlight some of my favourites on this post), the one thing it lacks is delicious, cheap Vietnamese food. Thankfully I went to Ottawa swiftly after a New York visit, where I got my fill of my favourite dishes. 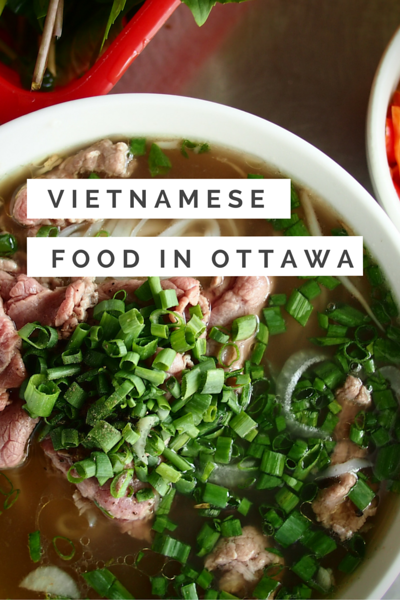 I’m going to divide these by dish. Those of you who have seen my 10,000 word street food guide to Saigon know that it isn’t simply about the right restaurant, it’s that each restaurant or street stall has its specialty, and one doesn’t simply go “for the food”. No, one goes because of a specific dish. This is the case in Asia generally, and I love the micro-focussed eating strategy.

You don’t say “where do you feel like eating today?”

Instead, you say “what dish do I want to consume?”

As with Saigon, Ottawa has many a Vietnamese restaurant, all serving staples like pho or goi cuon or bun thit nuong. But that doesn’t mean they taste the same in each. Here are my picks for where to eat based on what dish your stomach desires.

For those unfamiliar with the names of the soups or foods, please head over to the Saigon Street Food Guide where I explain what each dish is.

A big thanks to Mark of Ottawa Foodies, who is just about as obsessed with Vietnamese food as anyone I’ve met, most certainly in Canada. His suggestions were super helpful!

Finally, there is a map of these places at the bottom of this post, with the locations of the restaurants in the city.

I mention bun rieu first because it is one of my favourite soups. Rice noodles in a tomato and crab broth, tofu, fresh herbs, a spicy hint but you can add so much more. I have not found bun rieu I enjoyed in either of Montreal or New York, but I spent my birthday at Authentic Pho Vietnamese Restaurant (250 Greenbank Road, just north of Hunt Club), owned by a Vietnamese family who made a delicious Saigon-style bun rieu.

When I was a lawyer in New York, I used to eat at a place called Annam, which was at the corner of University Place and 12th Street. My apartment was right around the corner and I would head here frequently to order what I only referred to as “the number 7.” On their menu as an appetizer, I never knew what these pillowy steamed rice crepes were until I went to Vietnam for the first time in 2012. It was there that I learned they were called banh cuon, literally “rolled cakes” made of rice flour and folded around a filling of wood ear mushrooms and ground pork.

I found these delicious rolls at only one restaurant in Ottawa, and that was Pho Bac (873 Somerset St. W, Tel: (613) 563-0788) a teeny Vietnamese spot on Somerset that reminded me of the restaurants in Saigon. It felt like someone’s living room happened to also be used as a dining room. The owner is from the North, and earnestly explained that I should definitely go to Hanoi if I wanted real banh cuon. I didn’t want to tell him that I had been for that very reason as he already seemed confused about my questions involving mung bean chicken soup.

In addition, their bun cha was delicious, not only because the meat was grilled nicely but also because the spring rolls were made from rice paper (banh trang), as opposed to many of the other places I’ve seen in Ottawa. The other spots often used thicker paper, a mixture of rice and wheat flour, which wasn’t safe for me and other celiacs. Thankfully Pho Bac cooked with the real deal, and like that header photo taken in Saigon, resulted in crispy cha gio (fried spring rolls).

Call ahead as their hours seem extremely random — they were closed on Wednesdays.

Ottawa’s Vietnamese restaurant menus often refer to banh hoi, but they are not truly banh hoi since that dish consists of mats thin rice vermicelli, pressed into rectangular shape and served alongside grilled beef, rice paper, and a place of herbs and pickled vegetables. They aren’t meant to be consumed on their own but as part of a DIY mouthful of all the tastes you’d need: you start with the rice paper, you add lettuce, then herbs, some of the pickled carrots, a few pieces of cucumbers, sliced vertically, grilled meat, and the rice mats — and then you wrap it all up into a roll and dip it into fish sauce.

The beauty of Vietnamese food is its delightful balance on a plate, and each bite of banh hoi reminds me of this dance of tastes. Some of my friends find the process of rolling your own wraps to be time-consuming, but I find the process lets me eat more slowly and mindfully, and I enjoy every bite more fully.

There were many restaurants that claimed to serve banh hoi, though as I noted above it would involve a pile of vermicelli instead of those rectangular mats. Still, a delicious meal and the best I found was at New Pho Bo Ga LA (763 Somerset St. West). The grilled beef was easily the best of the options, though they offer tofu for those who are vegetarian. Note: don’t confuse New Pho Bo Ga LA with all the other Pho Bo Ga LAs out there in Ottawa. Seriously, there are at least a dozen. I put the address here so you go to the right one.

For an at home attempt, see Andrea Nguyen’s banh hoi recipe. (Also if you happen to be from New Zealand, Samwoo Vietnamese cafe in Otahuhu served insanely good, authentic banh hoi. The owners are from Nha Trang and they definitely had the mats of rice noodles that I wanted!)

My favourite memory of bun bo Hue was getting up at dawn to try it in Hue — and I am not a morning person. But the complicated tastes from that lemongrass and beef broth has stayed with me since, and when I can give it a shot elsewhere, I tend to hope for something even vaguely close.

The soup at Huong’s Vietnamese Bistro (359 Booth St.) was one of the better ones I’ve tried in Canada, nice and spicy with good cuts of meat and lots of lemongrass. We went during a huge downpour, which is a perfect time to warm your belly and limbs with spicy, hearty, rice noodle soup.

(Also worth a try at Huong’s is their bun bo la lot, rice vermicelli noodles topped with fresh herbs and beef smoked in betel nut leaves.)

This is a stew, not a soup dish, and the overall taste is just incredible. When I find a Vietnamese grocer I search for bo kho,  spice mix, because the lemongrass, annatto seeds, star anise, and cinnamon all come together in this slow-cooked beef extravaganza to make you smile.

Mark recommended I try Ox Head Restaurant (790 Kanata Avenue) for the com bo kho (“com” meaning rice), and the braised beef dish didn’t disappoint. If you want to try something a little different I would highly recommend it, especially on a cold day.

I couldn’t leave out pho! Though I did try it at quite a few places in Ottawa’s central Chinatown, the broths were mostly just ok and not as rich as I would have liked. The photo above is from my favourite place in Hanoi, a rich and complicated broth where you can taste all of the spices but still manage to enjoy the taste of the meat despite them. In the background is a purple cup full of homemade hot sauce. You can’t go wrong with homemade hot sauce.

Mark from Ottawa Foodies recommends @36Pho (1600 Merivale Rd) as the best option for broth in Ottawa. It’s outside Centretown/Chinatown area, however, so if you don’t have a car my pick for the bestest of your broth options within downtown is that of Pho Thu Do (781 Somerset St. W.). Good sized portions and the meat was very tender too. I’ll have to give @36pho a chance when I go back to Ottawa.

A 2018 ‘best of pho’ roundup from the Ottawa Citizen here.

Thus concludes the “Jodi stuffed her face in Ottawa” roundup.

A Vietnamese-Canadian reader Anna leaves a note in the comments, that I am reproducing here, about her favourite other eats in Ottawa:

The rib that I broke in Toronto is healing so damn slowly, but at least it is healing. I feel a bit like a sloth since I can’t exercise and I can’t sit for long periods of time without pain. The silver lining was a great birthday in Ottawa with my parents and my brother, friends old and new, and lovely readers.

I hope everyone is having a great summer! If you have additional Vietnamese recommendations for Ottawa, please do leave them in the comments.

p.s. If you want to pick up one of the hand-drawn maps of Vietnam’s foods, they are available here.

p.p.s. If you wanted some coffee to wash it all down, my friend Ivy has a great piece over on Eater Ottawa rounding up the best coffee spots in Ottawa and Gatineau.