The Many Sides of Amman

I started travelling alone in 2002, straight off a year of studies in France that had me thirsty for more movement. France gave me a masters degree and a newfound appreciation for solitude, but also reinforced a need to be elsewhere for longer periods of time. I went to Uruguay as a legal volunteer in sustainable law, ending up in a tiny town in the South where the only grocery store was several kilometers away and my office was filled with a noisy gaggle of chickens, easily tiptoeing in from the entrance – which lacked a door.

I went back to New York after many months of chickens and chivitos, but I’ve never forgotten the wonder in those initial days of total culture shock and confusion. After all, I grew up in Montreal, a fairly large city by Canada’s standards, and then worked for years in the bustling concrete madness that is Manhattan. The wonder was earnest and the memory almost tangible. Ever since, this fascination with small microcosms of society (and a way of life so different from the one I knew) has persisted in my current adventures. I’ve explored tiny villages and South American pueblos and Asian seaside towns, each replete with mini markets and random farm animals and dusty roads of their own. But in the end, I keep coming back to the cities.

There’s something about learning your way around a new metropolis that feels like a real milestone. But more importantly, within each of these large and chaotic cities are dozens of different communities encapsulated in miniature, a Jenga-like stacking of different cultures. You can take one away, and the city stands. Take away too many and the city risks collapsing in on itself. 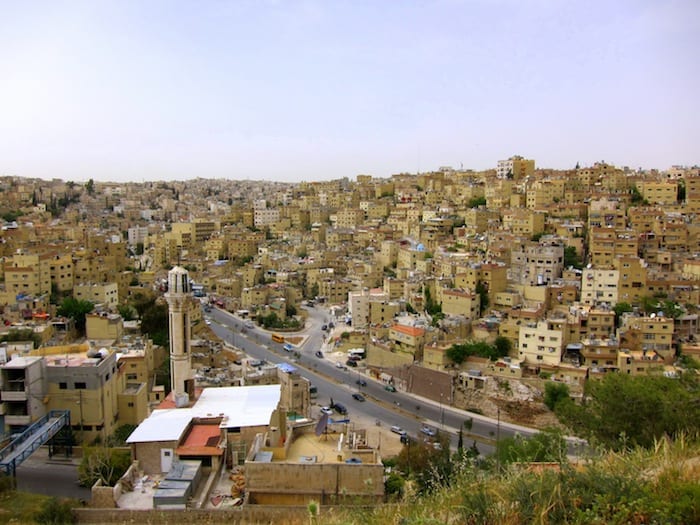 Having come from months in Chiang Mai, Amman was an adjustment. Gone was the bamboo scaffolding from construction sites, the curries and mangoes and motorbikes with at least 5 people (and a dog!) casually riding by. Gone were the umbrellas in the sun, the tiny plastic bags of sticky rice, the wai’ing and the ribbon of saffron through my days as Thailand’s monks went about their rituals. Instead, with the same backdrop of honking and bustle as Chiang Mai, Amman was a feast of delicate silks and veiled faces, of pungent spices and piles of fresh dates and a loudness and brashness that was almost comforting after tiptoeing through Southeast Asia. Which is why it remains a big shame that most people skip Amman.

Home to almost 3 million people, the city’s pulse was a contrast to the limestone houses piled upon sandy, monochromatic facades. Municipal law requires that the buildings be faced with local stones, affording the city a strange and calming continuity. From afar, shades of faded yellow and white. From the streets, a dizzying array of colours and patterns. Of course, the square sandstone and limestone buildings surround ancient ruins, many of which remain unexcavated. Much like my very rushed ruin-hopping in Rome, the idea that one can drive by a Roman amphitheatre or Byzantine ruins while on the way to work never fails to amaze me. 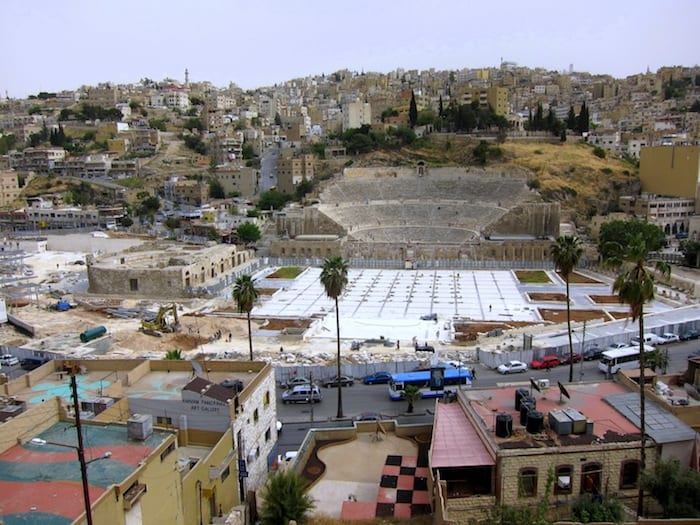 Like many cities in the region, Amman went through a very impressive Rolodex of rulers, from Ammonites to Assyrians, then Persians and Macedonians. Renamed Philadelphia by the Macedonian ruler of Egypt, the city eventually folded into the Nabatean kingdom until it joined the Decapolis under Roman rule in 106 AD. Christianity became the official religion during the Byzantine era, with many of the region’s churches dating back to Byzantine days. Though post-Byzantine years were quiet (earthquakes ravaged the region and Amman never recovered) the city resurged once the Hejaz Railway was built, linking Damascus and Medina. After the Ottaman empire splintered, Jordan (then Transjordan) became a territory under British mandate, eventually becoming the independent Kingdom of the Hashemites in 1946, ruled by King Abdullah I. Like Rome, Amman was spread over seven hills but with the influx of new people and damming of the Al-Zarqa river, its boundaries expanded and now takes up over 19 hills, each pushing outward from al-Balad (downtown) area of Amman. The highest of all is Jabal el Qala, the Citadel Hill of Amman and perched atop it is the impressive Citadel and surrounding ruins. 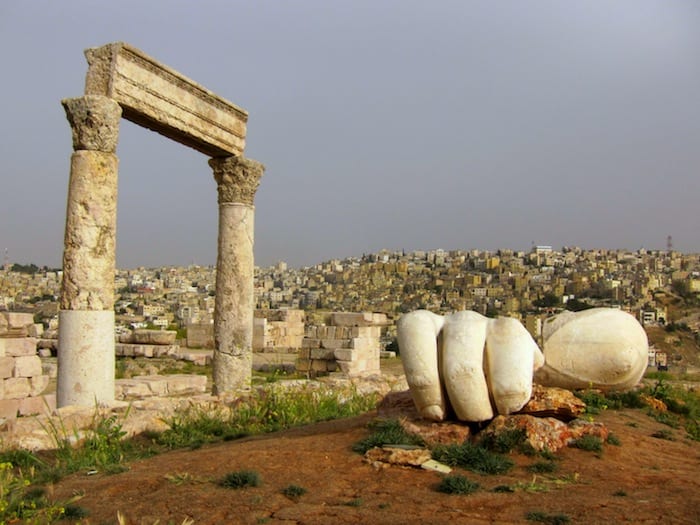 Temple of Hercules, with the hand and elbow from a colossal Roman statue that was excavated nearby. Archeologists estimate that the statue stood over 13 metres high, making it one of the bigger Hercules statutes from the era. I really loved the contrast between the colossal fragments and the remnants of the old Temple. 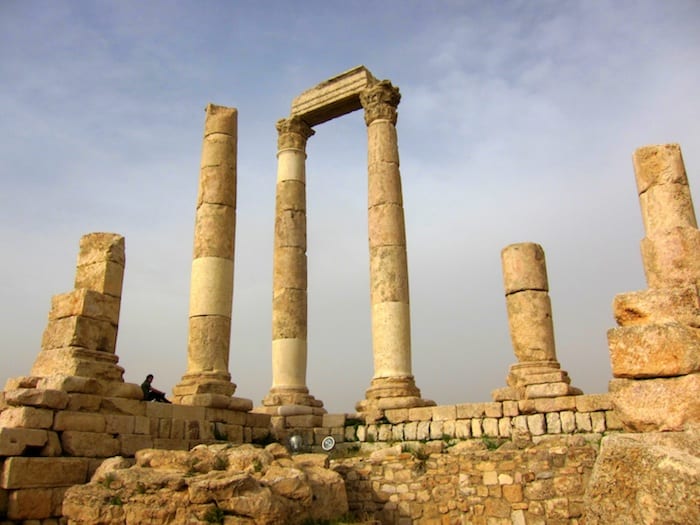 Late afternoon at the Temple of Hercules 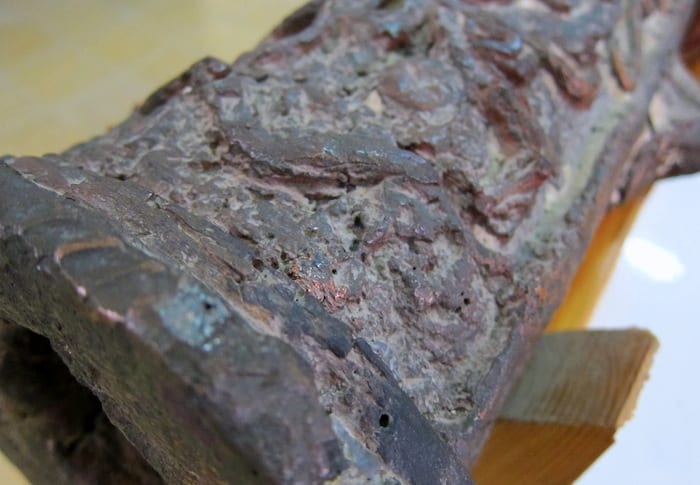 Bronze cannon dating from the 13th century, excavated in Amman. 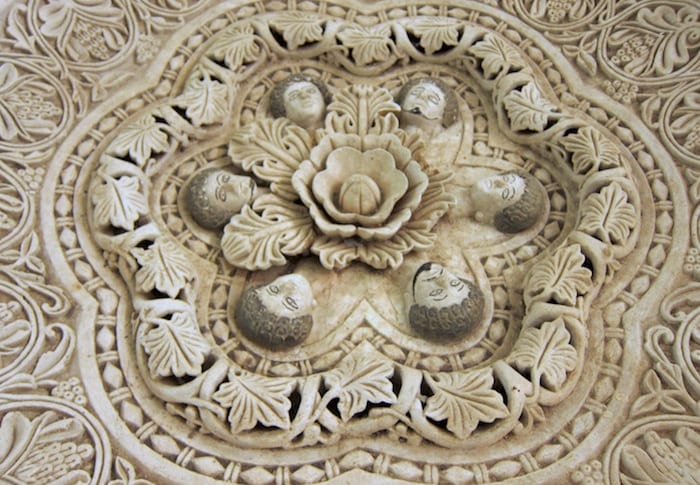 Stone carvings from Nabatean period at the archeological museum near the Citadel.

There’s a nice feeling of awe that settled with me after seeing the Citadel and the Temple of Hercules. It was one of the first things we did in Amman, and it proved an excellent macro view of the city. “Here! Ancient ruins and a view over the teeming masses of people below!”. But sights alone are rarely sufficient to get more than a superficial taste of a new place, and in the case of Amman the Citadel was subsequently complimented by a whirlwind afternoon in al-Balad, adding a brief layer of understanding to a city I’d only begun to digest. It was nice to just walk and watch and (of course) eat. 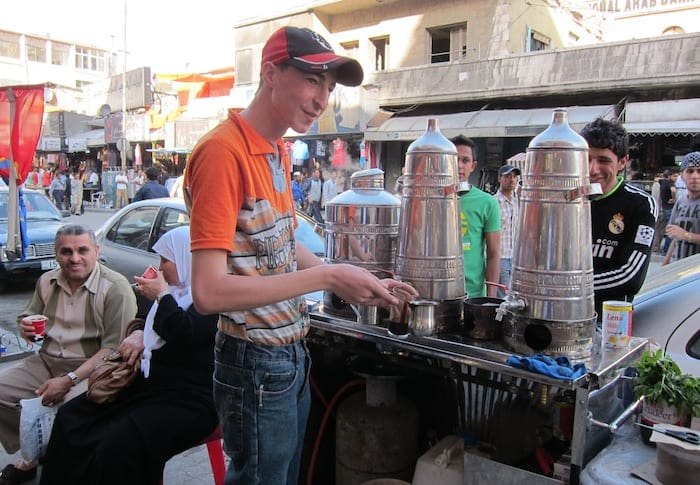 Those piles of dates I referred to earlier? Not a lie. And they were delicious. 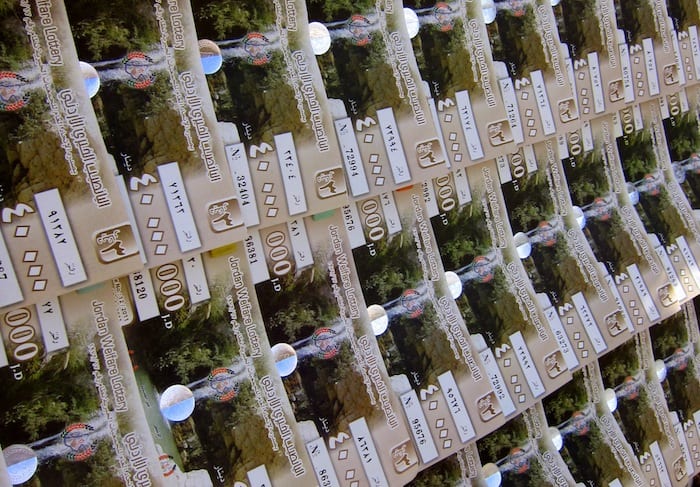 Lottery tickets for sale near the King Hussein Mosque in Amman. 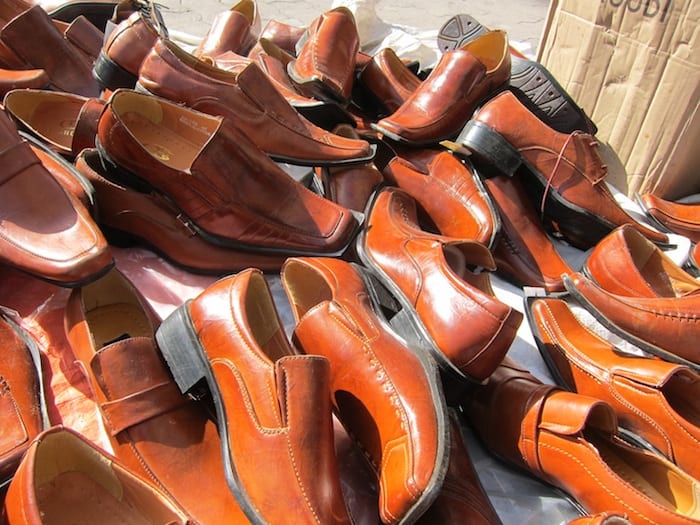 Shoes for sale on the street near the old souk (market) 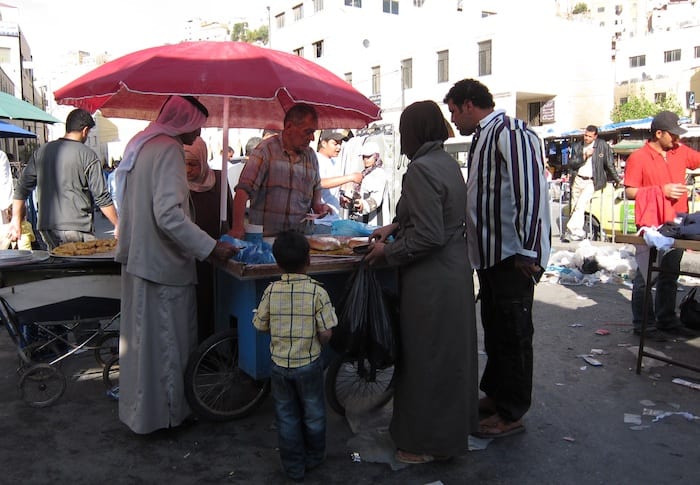 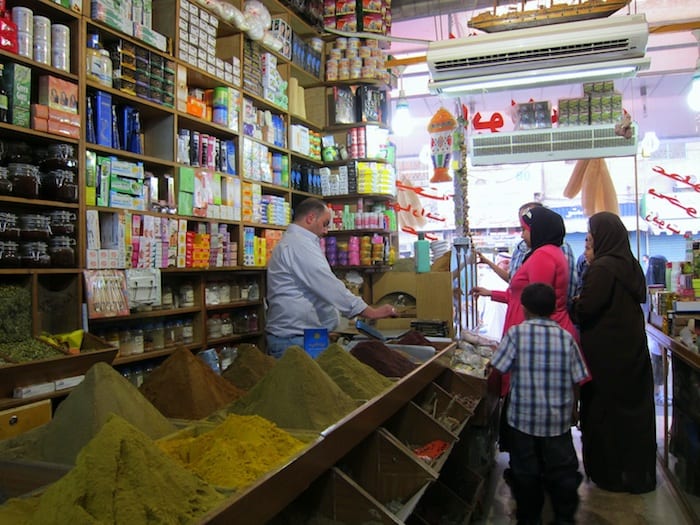 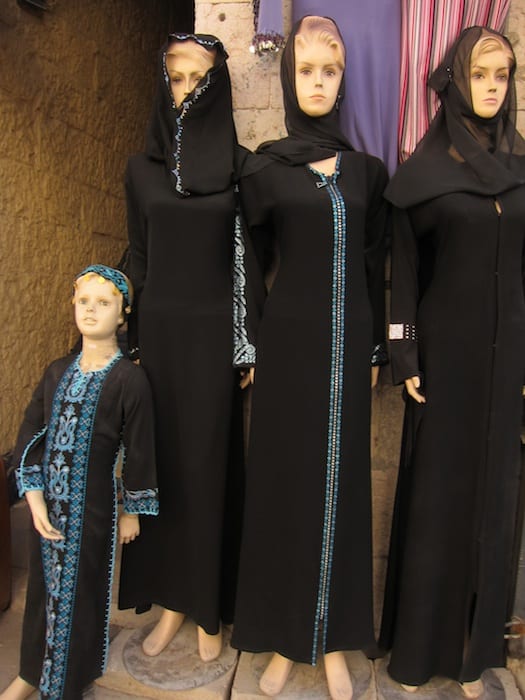 Clothes for sale in downtown Amman.

And, after hours of wandering and ruins and sensory overload, the sight of the city etched against the inky black sky was the perfect end to a long day. As the sun set, the many facets of Amman each faded into the horizon until all that was left was the ancient Citadel and the Temple of Hercules, standing guard over the city. 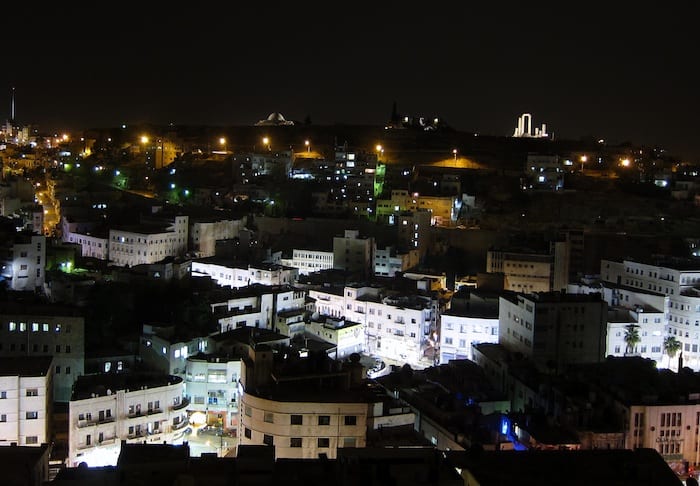 Most tourists skip Amman, arriving in Jordan and heading straight out to the ruins at Petra or to the Dead Sea. But I think that does Jordan a disservice – to get a real feel for a country, you need to dig into the jumbled markets and the flow of its capital. With old and new souks to discover, an ancient Citadel overlooking the city and a fascinating history, you owe it to Jordan not to forget Amman. I know I won’t.